“I think it [digital diplomacy] will give us possibilities to work together for a better world, and that is not a small thing in itself.”

Diplomacy has evolved throughout history, adapting to the requirements of nations, personalities of leaders, conflicts, alliances and paradigm shifts. Nevertheless, the skills needed to perform the diplomat’s mission have remained substantially the same.
In this context, a fundamental change in the way individuals and societies interact has deeply affected the art of diplomacy. Digital social media involve a new type of relationship at a personal level, but also a new way of reaching broader audiences.
Digital diplomacy is thus the natural consequence of the evolution of communications in the 20th and 21st centuries. The global reach of social media and their networks has had an impact in the way international actors relate to each other, not only at a state level, but also among businesses, international organizations, and other international entities.

What is digital diplomacy? Defining #digitaldiplomacy

Defining digital diplomacy may be a little controversial, due to the novelty of the term and the diverging points of view regarding its relevance in the diplomatic arena.

From a linguistic point of view, Jovan Kurbalija explains how different prefixes have the same meaning but also reflect nuances between the different terms used to speak about the Internet and related fields. Generally speaking, says  Kurbalija, “‘e-’ is used for commerce, ‘cyber’ for security and crime and ‘digital’ for development divides”, but he also explains each one: 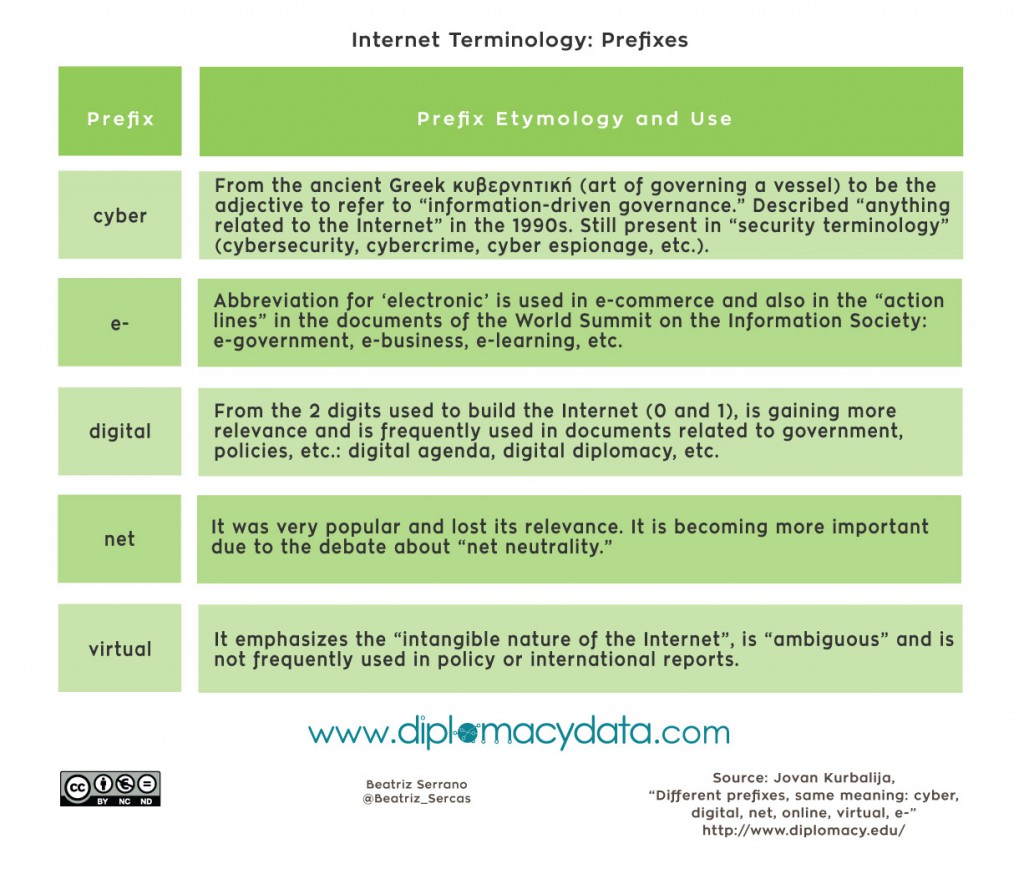 Although the expression digital diplomacy is the most widely used, Ilan Manor makes an important distinction between digital diplomacy and diplomacy 2.0, which is very useful to analyze the different penetration of the digital world into the foreign policy and the diplomatic agenda.

For Manor, digital diplomacy is “the use of social network sites by MFAs [Ministers of Foreign Affairs] for gathering and disseminating information”. Diplomacy 2.0 is defined as “follower-centric” and implies “ongoing engagement between MFAs and their followers”, the “adoption of an architecture of listening among MFAs”, calling for contribution “to the development of MFA and embassy websites, special web platforms and nation branding campaigns” and “crowd sourcing”.

Professor Juan Luis Manfredi gives the definition of diplomacy as the art of representing, negotiating, protecting and fostering a State’s interests with third parties, according to the Vienna Convention on Diplomatic Relations. Following this description, and according to Manfredi and Professor Rafael Rubio, digital diplomacy is the development of public diplomacy using digital tools with a wider range of activities, actors and opportunities. It is performed in an open environment where the debate is also global, digital and subject to continuous change.

Both authors explain how Joseph Nye’s concept of soft power (the ability to attract in order to persuade) derived later in smart power (combination of soft and hard power strategies), and a new type of international relations is growing now: diplomacy 3.0. Andreas Sandre explains in his book “Digital Diplomacy: Conversations on Innovation in Foreign Policy” that there is a “new foreign policy space that technology and digital diplomacy have contributed to craft within the diplomatic realm” where “nodes and links are components of networks that transcend government as we know it; where all actors interact and collaborate.” This new kind if diplomacy responds to the “hyper-connected, networked, super-speed, media-centric, volatile world.”

For Gökhan Yücel president of the think tank Yeni Diplomasi, a Turkish website specialized on digital diplomacy, diplomacy 1.0 is represented by Kissinger, diplomacy 2.0 would be Joseph Nye, diplomacy 3.0 is embodied by Alec Ross and diplomacy 4.0 is exemplified by Matthias Lüfkens and his Twiplomacy. He defines diplomacy 4.0 as “digital diplomacy + professionalism / privatization / individualization / personalization / mobilization + diplomatlessness – diplomacy without diplomats.”

In Diplomacy Development and Security in the Information Age, Shanthi Kalathil explains how the term digital diplomacy has become in some aspects a buzz word, but certain experts have been able to describe the change that transparency and volatility have produced in “the landscape of international diplomacy”. Kalathil include the features of the new diplomacy described by David M. Faris, these being firstly “transparency, visibility and contention” in the “age of sharing”, secondly non-state actors as powerful players in diplomacy and finally, diplomacy as “changing, blending traditional diplomacy with the subset of public diplomacy as well as aspects of development and governance.”

Corneliu Bjola[1] defines digital diplomacy, with a broad approach, as “the use of social media for diplomatic purposes.” He emphasizes that digital diplomacy “could change practices of how diplomats engage in information management, public diplomacy, strategy planning, international negotiations or even crisis management” but he also acknowledges, “little is known, however, from the analytical perspective.”

Gökhan Yücel explains that politics has “a new set of rules online.” He says that in digital diplomacy “the conversations exceed the existing boarders, hierarchies and boundaries by simply engaging through other means. It is not about competition and creation of new limits, but about coexistence in the world of ongoing communication and engagement.”

There are some key features common to most of the definitions of digital diplomacy: 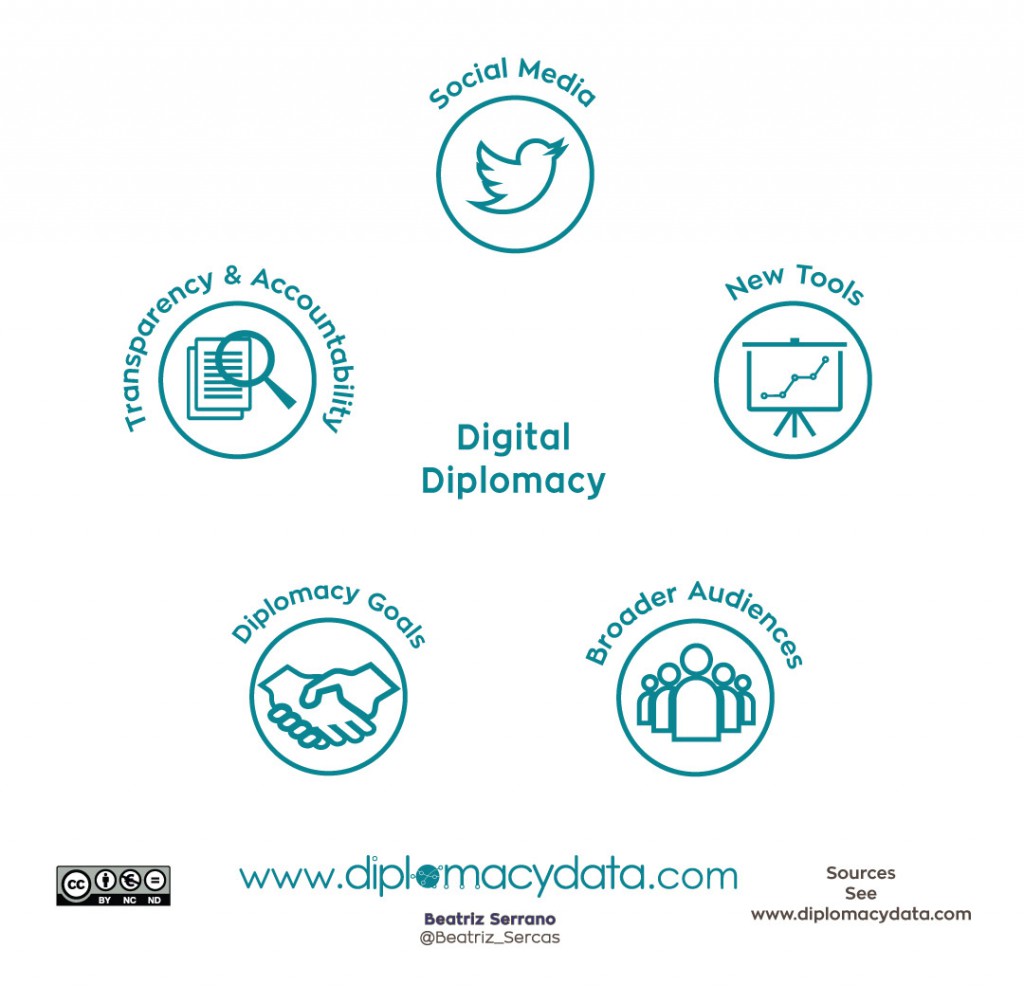 According to experts, digital diplomacy is therefore the use of social media platforms, reaching broader audiences in order to achieve diplomatic goals, with the help of new tools to disseminate, gather and measure information. The fundamentally open nature of the Internet makes diplomacy more transparent and accountable, as society demands.

Subsequent posts will elaborate on the history, main features and case studies of digital diplomacy.