Home
international security and terrorism
NATO: Adapting to the Challenges of the 21st Century

NATO: Adapting to the Challenges of the 21st Century 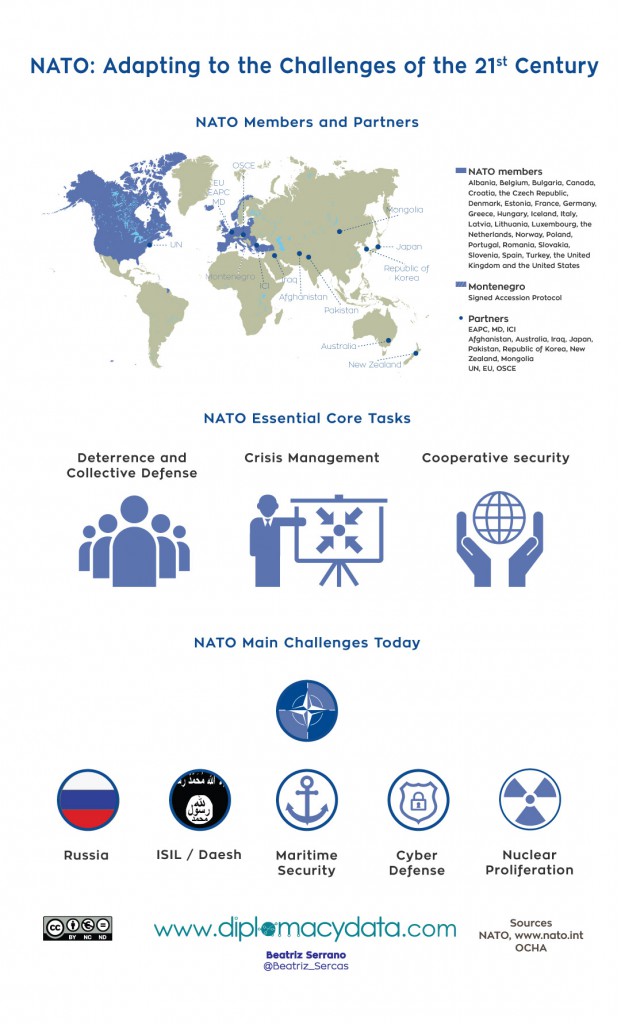 A visit to NATO in a group led by CIDOB (Barcelona Centre for International Affairs) is the perfect opportunity to review the state of the organization, its relevance today and the challenges it finds now and will encounter in the future.

The North Atlantic Treaty Organization is a political and military alliance of 28 countries from North America and Europe. It was born in 1949, after the World War II, in order to deter the Soviet expansionism, foster the European political integration and forbid the revival of nationalist militarism in Europe.

In addition, NATO membership is open to “any other European state in a position to further the principles of this Treaty and to contribute to the security of the North Atlantic area.” Montenegro would be the next country to join the NATO after the Accession Protocol signature by NATO Foreign Ministers.

As international organization, NATO has shown a unique ability to adapt to the paradigm shifts in order to deal with the challenges facing the member countries regarding defence, security and crisis management. It seeks an umbrella of security and economic integration in the areas close to its borders.

The main challenges that NATO currently finds, in addition to nuclear proliferation, are Russia in the East, Daesh in the South, maritime security and cyber defence.

The threats coming from Russia, Daesh and the cyberspace share some features such as asymmetry, difficulty to prevent, detect and neutralize the threats, and the need of a collective intelligence to counter the threats. The 3 of them try to break the cohesion of the Alliance.

Russia: instability from the East

Many experts claim that we are living the worst crisis in NATO-Russia relations since before the end of the Cold War. The illegal annexation of Crimea in 2014 by Russian forces, against the principle of inviolability of borders and countries’ sovereignty within their borders, brought an important shift in the NATO-Russia relationship, which were cordial up to then since Obama’s reset with Russia.

Due to the Crimean crisis, after the Russian invasion, the NATO ended the civilian and military practical cooperation with Russia. This has never involved the end of the dialogue between NATO and Russia; in fact, the NATO-Russian Council was never suspended.

Russia’s international behavior has created a structural systemic change where asymmetry, hybrid warfare and projection of global instability are gaining more relevance in international relations. NATO would like to promote higher predictability and a transparent behavior from Russia. It would also like to promote risk reduction through measures to avoid misunderstandings causing military conflicts.

Daesh/ISIL: terrorism expanding from the South

The threat posed by Daesh or the so-called ISIL is other main source of instability close to Europe. Its quasi-state structure, potential to expand radicalism through the cyberspace and terror attacks make the organization a serious danger for NATO members and the Alliance.

NATO’s Counter-Terrorism Policy Guidelines are focused on 3 main areas: awareness, capabilities and engagement. The Alliance develops new capabilities and technology to tackle terrorism, and cooperates with partner countries and international organizations to achieve the higher effectiveness in their missions.

NATO supports the Global Coalition to Counter ISIL through the provision of NATO AWACS (Airborne Warning and Control System, NATO’s ‘Eye in the Sky’) in order to increase situational awareness.

NATO is also assisting the EU’s Operation Sophia to help deal with the refugee and migrant crisis in the Aegean Sea. It has also announced it is ready to provide further support in maritime security in the Central Mediterranean following Operation Sophia.

In order to work in these 4 areas, NATO has 7 maritime security tasks:

The maritime security action in NATO is moving from deployed forces to network-based operations.

Cyberattacks have increased in number, complexity and damage and are part of hybrid warfare. For this reason, NATO includes cyber defence within its collective defence, affirming that international law applies in cyberspace.

In July 2016, Allies recognized cyberspace as a domain of operations where NATO must defend itself. For this purpose, NATO is enhancing its capabilities for cyber education, training, exercises, and information sharing.

The DCB was launched in September 2014 at the NATO Summit in Wales, when the concerns about the Ukrainian crisis and the Middle East crisis made the NATO develop precautionary instruments such as stability alliances with non-member states. The principle is acting only enough to avoid deploying forces on territories later on.

The Partnership activity started in the early 90s to develop capabilities, reform structures and institutions.

Major points about the DCB initiative:

The key principles under which the DCB is conducted are:

The implementation is performed with a Special coordinator designed by the Deputy Secretary General, a network in allied capitals, NATO staff, experts from the Allies and partners and a DCB Trust Fund.

There are currently 4 recipient nations:

NATO and the European Union

Given the fact that the EU and NATO share the majority of their members (22), they share strategic interests and are essential partners. The 2002 NATO-EU Declaration on a European Security and Defence Policy defined the NATO-EU relationship as strategic partnership and the 2003 Berlin Plus arrangements are the basis for NATO-EU cooperation in crisis management (development of international comprehensive approach by the application of military and civilian means).

Some examples of cooperation in the field are:

From Wales to Warsaw, and beyond

NATO Wales Summit 2014 meant the return to collective defence, affirming that deterrence “remains a core element of our overall strategy”. It involved the approval of NATO Readiness Action Plan to respond to the changes in security on NATO’s borders, especially due to the challenges from Russia and the MENA region. It enhanced the NATO Response Force (NRF) and established the Very High Readiness Joint Task Force (VJTF), which is able to deploy within a few days. It also confirmed a minimum of 2% of the Allies’ GDP to spend on defence, committing more than the 20% of their defence budgets on major equipment.

NATO Warsaw Summit 2016 implied the enhanced forward presence in the eastern part of the Alliance and the southeast. It meant training and capacity building in Iraq, support for the Counter-ISIL Coalition, the launch of a new maritime operation in the Mediterranean (Operation Sea Guardian), established the cyberspace as an operational domain. It also meant the commitment to enhance NATO’s resilience and its commitment to support Afghanistan and Ukraine, declared the Initial Operational Capability of the NATO ballistic missile defence system and underlined its relationship with the European Union, which defined as taken to the next level.

After 2014, the NATO’s relevance is out of question. NATO, adapting to the challenges of the 21st century, is still an alliance of 28 for 28, seeking 360-degree responses to the most urgent challenges facing the allies. Nevertheless, in order to deal with this threats and shifts, NATO Allies have to be committed, on paper and with means. Allied national leaders need to explain that defence and security are social issues; they have a clear impact on citizens’ quality of life, guarantee the welfare society, and help to protect human rights.