Resposibility to Protect (R2P) in Iraq 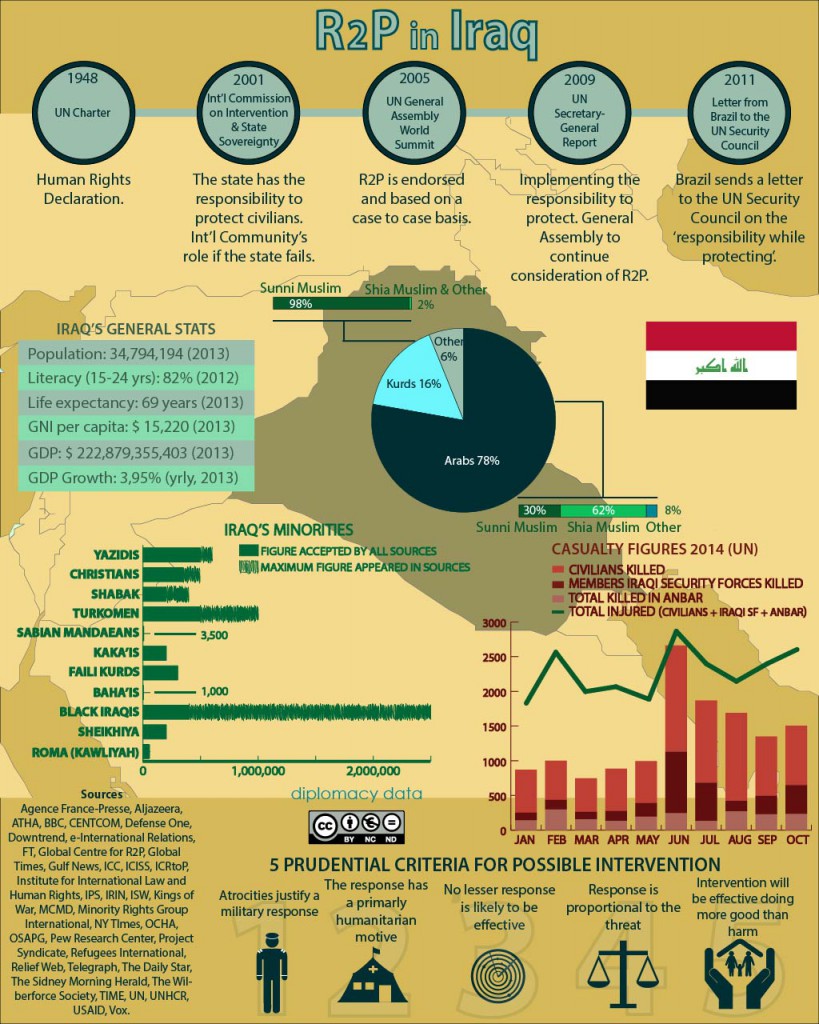 The balance between State’s sovereignty and foreign humanitarian intervention is one of the most debated issues in international relations. A number of historical benchmarks helps to understand the widespread vision in the West (see infographic):

On the other side, the Nation-State sovereignty and the R2P are two concepts that, in certain cases, have been used to justify interventions against human rights and dubious in the light of international law. There are many examples in which the State itself has acted against its civilians and has used the principle of the State’s sovereignty to avoid foreign intervention. There have also been cases in which R2P has been used to justify a questionable intervention by several states in a third state. This makes the balance between state sovereignty and R2P a very sensitive issue.
The international community is confronted with the crimes undertaken by the self-proclaimed Islamic State in Iraq. In the difficult balance between the state’s sovereignty and the protection of the Iraqi civilians attacked by the Islamic State, the R2P comes into play.
Several facts should be taken into consideration in the debate about the application of the responsability to protect R2P in Iraq:

At this point, let us remember the prudential criteria, or criteria of legitimacy, to exercise the responsibility to protect (see summary image):

In view of these facts, and on the basis of the criteria to exercise the responsibility to protect, a foreign intervention to guarantee the Iraqis’ survival and fundamental rights would be within the limits of the R2P and would be justified from the international community’s point of view.
At this point, a number of aspects should be analyzed. Firstly, if a US-led intervention is convenient from the point of view of legitimacy in the eyes of the international community, due to the mentioned historical reasons. Secondly, if an intervention mainly based on airstrikes and the shipment of weapons to the Kurds is the most appropriate intervention. Thirdly, a holistic approach is required to tackle the problem and avoid fuelling radicalism. It is a conflict with deep roots, foreign financial support and some ideological advocacy in the region. But all these aspects, due to the complexity of the analysis, will be discussed in future blog posts.
* Religion pie chart from www.ft.com. Some icons in the R2P criteria from www.un.org.