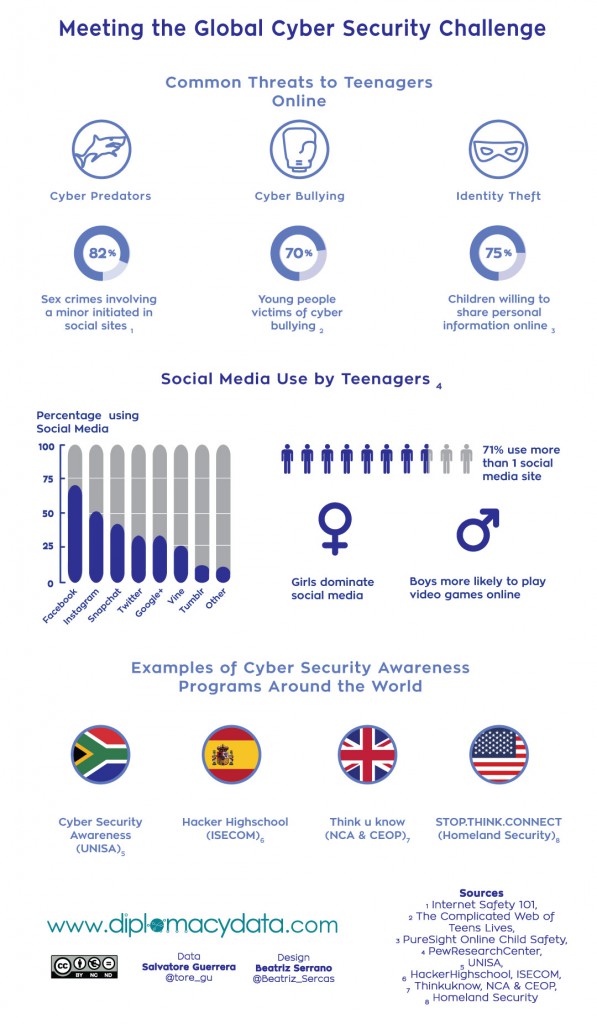 Post by Salvatore Guerrera, IT Security Specialist at IBM (@tore_gu)

An Introduction to the Cyber Security Awareness

Nowadays people live in a technological and sophisticated world: wearable devices, smart houses, driverless cars are elements belonging to the same puzzle, the Internet of Things (IoT). It is giving the world an ocean of opportunities and interconnection represents a major trend on the cyberspace: businesses are moving online, social relations are established on the internet and life is shared on the screen. However this ocean hides tricky issues. There are dangers and risks everybody should be conscious about and the major concerns are related to the new generations. They represent an increasing population growing in a digital era which lacks  cybersecurity awareness, the road to train people to meet the challenges posed by the Internet.

Cybersecurity awareness focuses on raising consciousness regarding potential risks and threats to the information which target human behavior in order to gather sensitive information.

Hence human behavior is the key element to be educated. Since 2009 the President of the United States asked for a campaign to help Americans open their eyes on the dangers occurring when they are online and what they can do to protect themselves and their children.

Risks and Dangers in the Childhood

Returning in the ocean, the common online issues facing teens include:

From the 2015 report on “The Complicated Web of Teens Lives”:

In order to face these issues, the information below is a brief checklist of tips to protect the kids and teens:

One of the favourite channels where it is possible to encounter the “cyber dangers” is social media. The following percentages regarding the use of social media for teens confirm the social media usage:

To complete the analysis two facts have to be reported:

What the World is Doing

It is clear the need for a security awareness program in order to prepare everyone, from children to adults, to to meet the ever-evolving challenges posed by the internet. Some valuable examples of how the world is meeting the global cyber security challenge are the following:

Cyber Security awareness is a priority in the United States and its relevance is growing in other countries because of the impact of the cybercrime on the world and the people.

Don’t lose time: Keep yourself and your children safe!